This article details burial practices from throughout Homeworld and beyond. 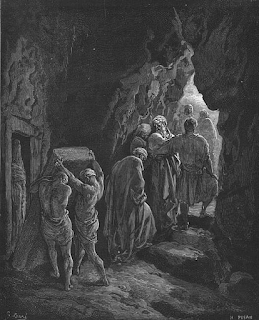 Burial Practices
Given their many and varied religious beliefs, the different peoples of Homeworld have numerous traditions for honoring the remains of their dead; detailed below are a few of those practices.

Interment
This practice is most common among humans and halflings, along with others who worship Gaea. It involves burying bodies in the earth, either in a small grave dug in the dirt, or in larger communal crypts. Examples of this range from small graveyards that can be found alongside shrines throughout Homeworld, to the expansive catacombs that exist beneath the Temple of Ptah in the Holy City.

Funeral Mounds
A variation on that practice involves heaping up the earth into large mounds in which the deceased are laid in a broad central chamber. It is practiced by certain bearfolk clans, as well as the fey creatures of the region known as Arcadia. What is more, it can sometimes be a useful expedient when many beings die at the same time, such as in the aftermath of a great battle. In those instances, the mounds then serve as a testament to the soldiers who made such a sacrifice.

Entombment
Taking that practice a step further, some beings create huge, elaborate structures in which to house the remains of their dead. These are sometimes known as sepulchers or mausoleums. Whatever the case, they are sprawling buildings that often contain numerous sarcophagi, along with (usually valuable) grave goods and even elaborate traps. The dwarves favor this practice, as do human nobles from the Eastern Kingdoms.

Cremation
Another ritual involves placing the remains of the deceased on a pile of flammable material, often wood, and then setting fire to it. It is thought that the smoke from the flames carries the spirit up and beyond this realm. This can be a good way to prevent the spread of disease, too, in the event of a plague. It is commonly practiced by humanoids as well as by followers of Lamashtu and Sol.

Burial at Sea
Among the mariners who sail Homeworld's seas, it is common to stitch a body into a canvas shroud, add a sizable weight at its feet, and then drop them into the sea. This prevents the need for hauling the dead aboard a cramped ship, and is similar to the act of interment. A variation of this practice involves filling a boat with flammable materials, placing the body atop them, setting it adrift, and then using a means such as a flaming arrow to set it all aflame.

Burial in Space
For similar reasons as mentioned above, aetherships traveling through the Void often find it expedient to cast off the bodies of those who perish in transit. It is also favored by those who worship Sol, in which case the bodies are pushed in the direction of the system's primary star.

Exposure
Some of the beings who live close to nature choose to leave to place bodies on structures raised above the ground, leaving it up to the elements and certain scavenging birds to carry off those remains, once again in theory to a realm beyond this one. Note that this practice is more common among those who live in sparsely populated areas, such as lizard folk and some of the fey; it is just not practical in more urbanized areas.

Ceremonial Practices
Whatever the means for exposing of deceased remains, funerary practices include some common activities for honoring those who were lost. These can include storytelling, chants, playing of music and singing of hymns or other favorite songs, recitation of poetry, processional marches that carry the remains, ritual fire-starting, and more.

Keeping Trophies
In contrast to the aforementioned rituals, which honor the remains of the deceased, it is common among certain savage groups to make trophies from body parts of defeated enemies. This includes displaying skulls (and more) on spears, using bones or skin to make decorative clothing, and even having oneself interred with the remains of slain foes so as to show one's dominance for the rest of eternity. Followers of lamashtu, humanoids and barbarians are most like to maintain this practice.