This post presents the Invisible College, a secret organization out of Great Britain for use with roleplaying games set in the worlds of the Shadow Roads and The Sixth Gun comics. 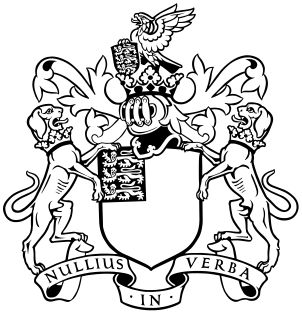 Introduction
It is widely known that the English Renaissance was a time of tremendous inquiry, exploration, discovery and expression. In the center of it all was Queen Elizabeth I, who reigned for more than forty years. Much of the credit for these developments, is due to the unprecedented group of people whom she collected around herself, who worked to investigate (and exploit) the mysteries of the world in may different ways.
In addition to their many and varied discoveries and contributions to society at large, these individuals also helped found the organization that would become known as the Invisible College. It is dedicated to investigating the occult mysteries of the world, using them to the benefit of the British Empire, and protecting them from exploitation by hostile powers.


History
The Invisible College was founded during the reign of Queen Elizabeth I of England, at her command and with the influence of the notable explorers, artists and other people mentioned above. Eventually an offshoot of the group, the Royal Society, would become something of a public face for continued investigation into scientific matters, while the College would continue secretly delving into matters of an occult nature. As mentioned above, the time of her leadership was tremendously productive, during which many different discoveries took place.

The Invisible College continue to thrive under the reigns of James I and Charles I, both of whom continued their patronage of the College. A major disruption occurred, however, during the Puritan Revolution. That was when Charles I was beheaded, and rulership passed to Oliver and then Richard Cromwell. Like many of their Puritan associates, they had little tolerance for the—according to them—heretical study of magic. That brought on five years of activity more secretive than the College's usual discretion, conducted without official sanction or financial support.

Matters seemed to settle after the Restoration, when Charles II was put on the throne. The College continued to operate in secret, but once again had authoritative and monetary aid. There was a notable incident in the American colonies, however, at the Massachusetts colony in the New World. There, Puritan settlers—who'd left England due to intolerance following the Restoration—accused a number of their fellows of practicing witchcraft. Indeed, nineteen of the accused were even convicted, sentenced to death and executed for their crimes. Although many historians believe the incident was due to some kind of mass hysteria, at least a few had been engaged in the study of magic.

A real test of the College occurred during the reign of King George III, who was mad. During his reign a schism erupted between those British citizens in the Americas who were loyal to the Crown and those who sought independence for the colonies. This led, of course, to the American Revolution, which saw the Crown lose control of its people in the New World. Some of those colonists who had had dealings with the Invisible College even pressed to found their own organization dedicated to magical investigations, which in 1789 came to be the Black Stars. During the War of 1812 agents of the Invisible College attempted to recover some of their lost assets, including during attacks on Washington, DC and New Orleans.

The Enlightenment brought about many notable scientific discoveries, and also a period of great skepticism regarding magic. That is just fine for the current members of the Invisible College who continue working to protect Great Britain—once again under the reign of a powerful queen, Victoria—from possible harm caused by eldritch enemies. 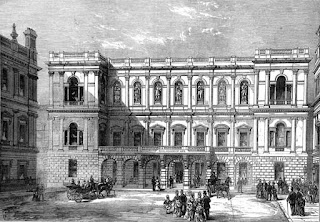 
The maintains its headquarters in the heart of London, using a museum of cultural history as its front. This building is three stories in height, with steps leading up to the front door (1). Inside there is a lobby for receiving visitors (2). Small niches are filled with comfortable chairs and tables for those who need to rest (3), and doors lead into stairways that lead from floor to floor (4). Twenty-two different open rooms (5) provide space for displaying non-magical items, usually with a particular theme for each area. Finally, an atrium in the center of the building (6) is lit from above by skylights, and surrounded on the upper levels by a railing.

The repository's underground level is something else entirely. Hallways lead around much of the interior (1), and there are garderobes (2) and storage closets (3) throughout the place. Two sets of stairs (4) lead up to the above-ground levels; they are kept locked at all times. There are small private rooms, which double as offices, for junior (5) and senior members (6) of the organization. In the middle of it all is the mess hall (7). Two bunk rooms house the guards (8), and there is an armory stocked with weapons (9). Toward the rear of the facility is the kitchen (10), along with a well-stocked pantry (11) and the cook's quarters (12). Several holding cells are located in one corner (13), and there is even a room for interrogating—some would even say torturing—prisoners (14). Opposite them is the library (15), attached to which are the Headmaster's quarters (16) and a secret chamber for holding items of particular value (17). 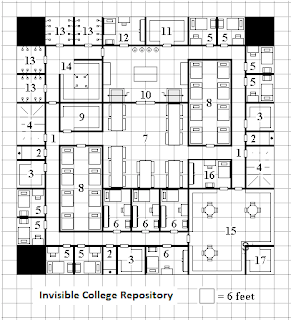 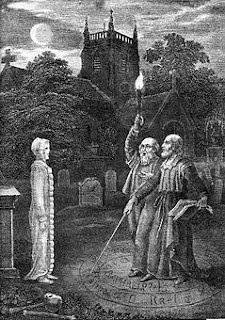 Plot Hooks
The Invisible College could be involved in all of the following business.

Posted by Nate Christen at 5:21 AM