This next chapter in the ongoing story of the Larks took me a while to suss out, but here it is. 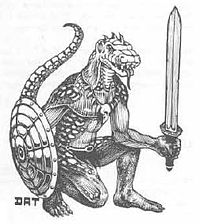 Desperate Measures
Once again Lucinda used Polly to do the scouting and thus they were able to track the pirates aboard the Resplendent and Skylark deep into the Sacred Archipelago. This time, too, the Larks stopped short of overrunning their quarry, and instead found a small island with a bay in whch they could conceal their own stolen galley. Some of the crew members set up a crude camp using spare sailcloth and lumber, while others ventured inland in search of fresh water. Uriel hunted down a wild boar for them to roast, and Nar'raw brought in some fish, too.

When they were settled in for the evening, Horace started working on his clever plan—which began by hauling several crates of wine bottles from the stolen galley to the beach.

Lucinda raised an eyebrow. “This is your plan? To get the crew roaring drunk?”

The captain frowned. “Sadly, no. We need to empty the bottles for an experiment that Max has planned.”

For his part, Max had striped off his leather armor and most of his clothing, and stood waist-deep in the water. He carried a large pouch on a carrying strap, one that contained several emptied wine bottles. To one of them he added several small stones, feeling the weight of it before adding more, and then replacing the cork and dropping it into the water. When it floated, he retrieved it, pulled out the cork again, added a few more stones and tried again. This process he repeated until the bottle hovered just beneath the surface. Satisfied, he tucked it back in the satchel before returning the their camp.

Thus they began the process of preparing more bottles. On shore, Lucinda and Konrad used a small set of scales to measure out more of the stones; Horace, Uriel and Max led the other crew members in filling and testing the bottles. After an hour's work, they had two dozen ready to go.

“Okay,” Horace declared, surveying their work, “I think the first part of the plan is finished.”

“What are you going to do?” Uriel asked.

“I will go and talk to my people.”

Later that night Uriel paddled their crudely crafted boat, with Nar'raw as a passenger and Max as a lookout, and paddled further toward the pirates' position. Once they were as close as they dared go, they pulled the boat ashore on a sandy beach and turned it over; Max cut some brush with which to cover it. While he did so, Nar'raw took a satchel with the prepared bottles, and cinched a belt with a sheathed knife around her waist.

“Wait,” Uriel interrupted. Loosing the longsword and scabbard that he wore on his back, he passed them to her. “Take care of yourself.”

She nodded, and then walked off into the water.

For their part, the men settled in to wait. Mindful of how close they were to their enemies, they talked little. Mostly they watched the stars circle overhead, but none of them could sleep.

It was nearly two hours later when Max spied a dark form approaching through the water. He and Uriel both readied their bows, until they recognized the telltale form of a lizard person.

It was not Nar'raw, however.

“What's going on?” Uriel asked the newcomer. When the lizard person just looked at him, the half-orc switched another, more sibilant language.

The other responded in kind, and Uriel translated. “His name is Sik'kal. Nar'raw sent him.”

“You understand him?” Max asked.

The halfling gave a knowing nod, but the half-orc ignored it. Instead, he engaged the lizard man with a mix of stilted language and pantomime. Gradually he was able to translate. “The pirates have them diving on a wreck near here. He was in the water when Nar'raw came to him; she told him what we're doing, and then took his place so that he could come meet us.”

Uriel shook his head. “No. Sik'kal doubts that they can tell the lizard folk apart.”

Max snorted. “Did she explain our plan.”

Max smiled. “Good. Those pirates won't know what hit them.”

From the upper aft deck of the galley Resplendent, Captain Arturo Martelli surveyed the work of his crew and their forced lizard folk laborers. Although they'd been making slow progress, the steadily growing pile of material from the wreck, still imbued with magical energy, attested to the fact that Martelli's efforts were succeeding. Soon, the pirate captain would gain control of an aethership.
Admittedly, he didn't understand all of what that notion implied, but he had a good idea that it made his band of pirates much more powerful.

“Captain?” It was Julius who interrupted his musings.

“Some of the divers, sir. They've been down there for an unusually long time.”

“What are you saying?” Martelli demanded.

“I'm saying, sir, that I think something is wrong.”

Before the captain could demand an explanation, he heard another voice cry out. “Ship, ahoy!”

Pulling out his spyglass, Martelli looked in the direction the lookout indicated. There, indeed, was another galley, its prow and foremast just emerging from behind the coastline of the nearby island.
Then plumes of smoke began to rise from the approaching vessel.

“Damnation,” one of the pirates swore. “A fireship!”

“Captain?” someone else asked. “Orders?”

Several crew members rushed to the capstan, where they struggled to comply—and failed. “Captain!” one shouted. “The anchor's fouled!”

All the while, the other galley continued its approach, the smoke from it grown thicker and darker.
“Captain?”

Martelli hesitated—and in that moment, a dozen lizard people popped up to the surface of the water. Each clutched a corked bottle, and in unison they tossed them up over the galley's siderails, to smash on its decks. The sound of breaking glass was startling, but not so much as the smell of spilled lamp oil.

The pirates knew that they'd been beaten, and most of them leapt overboard, only to be wrestled into submission by the swarming lizard folk. The oncoming fireship hit Martelli's galley broadside, its beaked prow driving deeply into the Resplendent's hull. Flames continued to spread, threatening to set off the lamp oil.

Arturo Martelli stood his ground, however. “Hold!” he shouted, and then, fumbling in a pouch on his belt, pulled out what looked like a black handkerchief. That item he stretched around the blade of his sword. “Hold, I say, or I'll destroy the eggs!”

For a moment, many who were engaged this battle paused, waiting to see what would happen. Then a multi-colored figure dropped out of the air, landing on the sword with a flurry of feathers, and then took off again with the cloth in its talons. Then Polly, along with the pirate's last hope of victory, was gone.

Martelli stared at his empty hand for a moment, stunned. Flames were now spreading quickly over the deck of the galley, and the smoke made him cough and his eyes water. Reaching into a different pouch, he muttered a pinch of some substance, muttered an incantation, and disappeared.

In the aftermath of that battle, the Larks and their lizard folk allies settled into the camp that the pirates had built on the nearby islet. While the sailors built a few fires and began preparing food, their officers made a solemn presentation. Uriel approached Nar'raw, holding the cloth that they'd stolen from Martelli. Then, unfolding it, he spread the cloth out on the sand in front of her. The moment it was flat on the ground, its surface seemed to collapse into itself, and there was a hole in the ground.

Inside that hole were dozens of eggs.

Nar'raw gasped and, stooping beside the hold, gingerly lifted out one of the eggs. Seeing that, the other lizard folk gave a joyous shout, and rushed forward to join her. As they reclaimed their eggs, the Larks joined them in celebration. Those who had instruments began playing music; there was much dancing, and food and drink flowed freely between all.

A little time had passed before Nar'raw approached Uriel. “Thank you,” she said, and kissed him.

Posted by Nate Christen at 9:32 PM