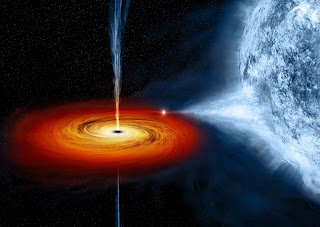 Because of their long lifespans, the elves have held a distinct advantage over others in the field of interstellar space exploration. While many of their expeditions have been successful—consider, for example, making contact with the arborlings of Sylvanus and the kasatha and shobhad on their planet of origin—at least one such voyage, to explore a black hole and its stellar companion, went terribly awry. 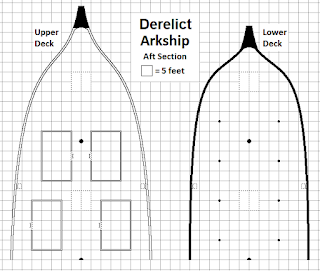 The cause of this calamity was an entity known as a colour out of space. It dwells in this location because of the powerful gravitational effect that the black hole exerts upon its companion star, an effect that the colour finds rejuvenating. When the arkship arrived, the colour attacked its crew; the elves were forced to flee in their longboat back through the interstellar portal that they were towing, and then to seal it off from the other side. Since then, the colour has slowly been preying upon the animals aboard the arkship, driving some into a frenzy and draining others until they succumb and acquire the colour-blighted template. 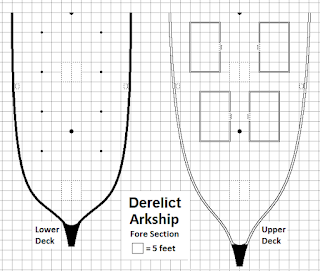 Colour out of Space: Refer to pages 38-9 of Bestiary 4 for stats.

Additionally, there can be all manner of colour-blighted animals aboard the arkship, along with others that have become aggressive because of hunger. Indeed, the rectangular compartments that have been installed on the arkship's main deck each house different types of creatures, ones that are normally kept separate from each other but that are now running wild because of the crew's absence. There could even be more fantastic types, especially a unicorn or a pack of blink dogs. It's also possible that some crew members were left behind; base stats for them can be found in a previous article.


Using the Derelict Arkship in an Aetherial Adventures Campaign
This lost ship can work into numerous space fantasy adventures, including the following possibilities.

Posted by Nate Christen at 5:13 AM