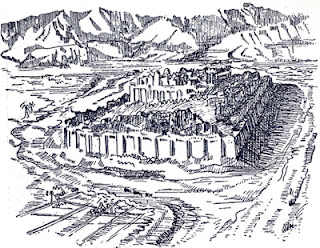 Just as the details regarding certain species of creatures can inform the nature of a society or culture that they might build, so can the different character classes from the Pathfinder RPG be used to inspire the types of government (or lack thereof) that people might form. In this way, they can give different worlds—or different nations or settlements on the same world—distinctive flavor. Take, for instance, the following possibilities.

Barbarians and Druids: Primitive and Nomadic Tribes
These two classes are emblematic of a society in which people still lead a nomadic lifestyle, moving from place to place while following the migrations of animals, the natural growth cycles of edible plants, and the like. While they may return to more permanent locations in the winter, during the rest of the are always on the move. They possess only primitive material goods—with weapons and tools for hunting and gathering food being the most prized—and that makes trade with other worlds particularly lucrative, even though they might not have minted coins with which to pay for goods. In general the people know the land, along with its flora and fauna, very well.

Fighters: Military Coup or Warrior Hierarchy
This society might be a long-established military hierarchy, such as one led by a king who shares power with his noble knights, or the product of a recent coup d'etat. In either case, power and influence can be shared based on rank and achievement—although one does not necessarily match up with the other. For example, a particularly charismatic leader could be good at convincing others to obey him, but wouldn't be able to defeat others in single combat. In such cases, however, the strength of one's entourage might outweigh individual prowess. Whatever the case, a society such as this one could feature jousts, archery tournaments and other such contests as means of proving, and thus establishing, oneself. On such worlds, monks might be the pinnacle of self-actualization, or they could be viewed as strange ascetics who are too narrow-minded to make use of armor and more effective weapons.

Paladins and Clerics: Theocracy
When the followers of a particular religion or philosophy gain power over others, the resulting society can bring order and peace or distrust and terror. That is because the dominant faith tries to eliminate all others, believing them to be misguided (at best) or heretical and dangerous (at worst). That bias can manifest in many different forms, from intolerance to outright persecution, and even a crusade. Of course, the exact nature of the society's outlook on life and morality depends on the god(s) whom they worship, along with—to put it in game terms—the domains in the respective portfolio(s). In this way the espoused values can run the gamut from good to evil, law to chaos, and everything in between them. Moreover, monks could be a part of this society, self-disciplined warriors who fight to promote the dominant doctrine, or they could be just another group of unorthodox people who dedicate themselves to the wrong tenets.

Wizards and Sorcerers?
In many ways, a society run by wizards might closely resemble one based on a particular religion. After all, each is run by a cabal of powerful spellcasters. Given the studious nature of wizards, however, they might be more likely to rule by committee. In fact, it could make sense for them to be led by a council of mages, with the most potent practitioner of each school having a seat on it. The notion of a magical aristocracy also raises the question of how sorcerers would be involved. For them, of course, it's a question of bloodline, something akin to royal dynasties of kings and queens.

Rogues: Rampant Organized Crime
A society run by thieves can take at least two different forms. One is more covert, in which they work “behind the scenes” of another type of government. In that way they could secretly promote all manner of illicit activities, perhaps aided by collusion from the powers that be, and possibly even controlling the ruling powers via extortion or some other type of coercion. The other option is for an out-and-out lawless society, one in which the criminals run roughshod and there's no power who is willing or able to stand against them. This might take the form of gangs running amok, taking what they want from other citizens who are just trying to scratch out a living. Perhaps this would occur in the aftermath of some great calamity, one that has left only the shattered remains of a previous civilization.

Rangers?
The solitary nature of these wilderness warriors makes them unlikely candidates for forming any type of government. They could fit nicely into some of the options mentioned previously, however. For example, they would be valued as scouts in a fighter-driven society, or as explorers in a culture driven by arcane or divine spellcasters. Those who are lawful and/or good might find themselves at odds with a society led by thieves, necromancers or evil clerics, however.

Bards: Compliment or Contrast
Bards, too, seem unlikely candidates for establishing a society on their own. They make a natural addition to many of the previous options, however. As storytellers, they would be favored by warriors who seek to promote their own glory, especially through epic poetry and song. They might travel along with nomadic bands, or from stronghold to stronghold in a culture that has more permanent dwellings. Arcane spellcasters are likely to appreciate them as fonts of lore, especially when such learning could lead to new sources of magical power. In a society run by clerics, on the other hand, they might be viewed as a threat if their stories are in opposition to the established orthodoxy, and thus could be persecuted as sources of heresy. Indeed, their knowledge might extend back to the time before the reigning government gained power.

Posted by Nate Christen at 5:27 PM