Factions: The Guardians of Gaea and the Sol Society

Detailed below are two more factions for use in a space fantasy (or more traditional) RPG campaign.

Guardians of Gaea
More a loose band of confederates than a group with any real structure, the Guardians of Gaea are those individuals who choose to protect Homeworld—the planet itself, and not any of the political entities upon it—from artificial harm. In that they make an important distinction; while natural disasters are acceptable, since they heed the will of nature, those calamities brought on by people's efforts must be prevented. Examples of the latter include sabotaging logging operations in ancient forests, defending a sacred mountain against invasive mining, thwarting excessive hunting practices, and the like. As such, it boasts numerous rangers and druids among its members, especially humans and halflings; less common are barbarians, dwarves and elves.

Goal: Protection, Cultivation
Ensuring that Homeworld—the Earth Mother—will always bear enough fruit to feed her children is the ultimate goal of this group. In addition to defending pristine locations in a firm but compassionate manner, the group also works to preserve animal and plant types that are threatened.

Alignment: NG
While they are committed to protecting their Earth Mother, the Guardians of Gaea are generally non-violent and seek to resolve conflicts in a peaceful manner. They are not so concerned about the laws of the lands in which they work, because those laws are sometimes made by individuals who are motivated more by power and wealth than by preservation.

Leader
Unlike many other organizations, the Guardians of Gaea do not have a single reigning leader. Instead, their members make decisions through debate and then vote of all who are present.

Headquarters
Just as they lack a single leader, the Guardians also do not have permanent bases of operations. Instead they move about in nomadic encampments, forming temporary tent towns or, when conditions permit, living directly in nature's embrace. When it becomes necessary for members to meet in the city, they prefer to use garden space for doing so.

An example of this is the meditative garden, an element favored by a number of eastern cultures. It consists of a walled enclosure that contains a carefully maintained orchard and garden. Usually there is a pond in the center, surrounded by various trees, shrubberies, flowers and other plants. Lining the exterior wall are a number of small, simple buildings that boast numerous windows, albeit ones that can be sealed with shutters during inclement weather. Such gardens provide a large, open space for full-group gatherings, as well as smaller, more intimate areas for private business. 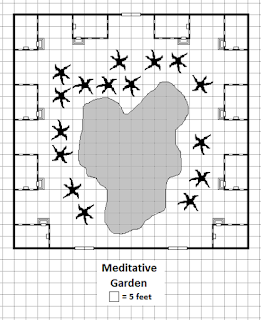 Using the Organization in an Aetherial Adventures Campaign
This organization can provide plenty of plot elements for a space fantasy RPG campaign; presented here are a few of the possibilities.

Sol Society
Believing that much evil happens in the dark of night, members of this organization seek to shine the Sun God's light into every corner of the Universe. Indeed, they maintain that the Light of Truth (as they see it) can bring enlightenment and thus happiness to all places. It should come as no surprise that clerics and paladins make up most of this group's members. Additionally, many lay people pledge their loyalty to this group. Finally—although it is not widely known—a growing contingent of sorcerers threatens to pollute the purity of the Society's mission, as detailed below.

Goal: Illumination, Protection and Punishment
Spreading the Sun God's teachings and the spiritual light that they bring is the foremost mission of the Order. A close second to that is protecting the faithful, follow by bringing to justice those who do harm to his followers.

Alignment: LG
In theory, members of the Society seek to promote justice and well-being for all. In practice, however, this zeal can sometimes lead to a sense of self-righteousness that borders on intolerance for, and even persecution of, those who profess other beliefs.

Leader
Sir Cyrus is the elected leader of the group, a paladin of the Sun God who has earned the respect of his peers through wise judgment, fair dealing and bravery in battle. He divides his time between the local Church of Sol and pilgrimages into the desert, where he fasts and atones.

Headquarters
Some might be surprised by the fact that this group's headquarters in any given city is a simple, modest affair, generally a church building consisting of a few rooms and built of wood, brick or stone. Those who are familiar with the organization, of course, recognize that anything more ostentatious would embrace vanity rather than altruism.

Said church usually boasts a broad entry area (1)—in this case, with two sets of double doors opening into it—that has a spiral staircase leading up to the bell tower. Many pegs line the walls of this room, providing a place for visitors to hang their cloaks. More double doors lead from there into the main sanctuary (2), which is filled with orderly rows of benches for the congregants. There is also a raised pulpit in the front of it. Beyond that room is a rear vestibule (3), which itself leads into a storage room (4) and the presiding priest's office (5). 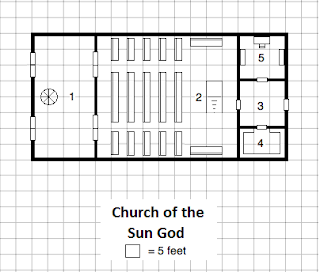 Using the Organization in an Aetherial Adventures Campaign
This organization can provide plenty of plot elements for a space fantasy RPG campaign; presented here are a few of the possibilities.

Posted by Nate Christen at 8:01 PM