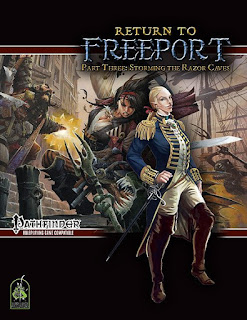 When I first received the email with the download for this scenario, two thoughts crossed my mind. First, I was frustrated because this was released five and a half months after its predecessor. Second, I noticed that it's twenty-six pages in length, shorter than the scenarios that came before it.

Even so, I think this is an adventure that will make for some fun sessions. It starts out in Freeport, but then leads to a place called Hangnail--a wretched hive of scum and villainy on an island not too far from the Serpent's Teeth. It's pretty heavy on combat, but includes good opportunities for roleplaying and--more importantly, in my opinion--some challenging action aboard a ship at sea. Although overall it might be a little light as far as the total number of encounters are concerned, the ones it does have are solid and seem to be leading into an important conflict that will be on par with Sea Lord Drac's plot, the Barbarian Invasion, and other such battles that have been woven into the history of the Freeport setting.

Posted by Nate Christen at 2:52 PM