Back in August, when I posted my recap of this year's Gen Con, I mentioned that I'm working on a series of space fantasy adventures—actually, an adventure path. I don't know if I've mentioned before that I like to coordinate my reading with my writing. Looking for space fantasy novels to go with this project is what brought me to The Daedalus Incident, The Enceladus Crisis and The Venusian Gambit, books that I reviewed back in July. I've also tracked down a printed copy of The Sail Weaver by Muffy Morrigan. To fill in the gaps, however, I've also been rereading some of my old Spelljammer books, and I figured I'd share some of my thoughts. Please note that I'm reviewing the first novel here, and I'll add to this post as I finish the other ones. 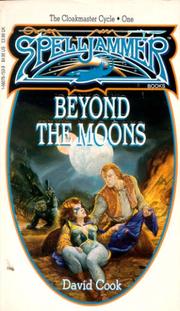 Beyond the Moons by David “Zeb” Cook
This is an unusual series because it has six novels by five different authors. The first book, then, needs to launch the whole thing, and does a good job of it. Detailed below are what I see as the pros and cons of the novel.

Into the Void by Nigel Findley
In this second novel of the series, much of the action takes place in Wildspace, although it concludes in and above the Forgotten Realms. Once again, here are some highs, lows and other notes.

The Maelstrom's Eye by Roger E. Moore
This third entry from the series leads from the Rock of Bral to a gnomish outpost called Ironpiece, and thence to what might be the most unusual sphere in the whole Spelljammer cosmology. It adds the orcish fleet to mix, too, along with a mysterious villain who looks like a lich.

The Radiant Dragon by Elaine Cunningham
The fourth novel in the Cloakmaster Cycle—and the second one not set on a major campaign world—takes Teldin Moore right into the middle of the Unhuman Wars, the growing conflict between the goblinoids and the rest of the Known Spheres. Both sides seek to gain control of the mighty Spelljammer vessel, either by recruiting Teldin or by killing him and taking his cloak. 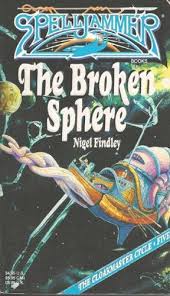 The Broken Sphere by Nigel Findley
This, the fifth novel in the series, sets the reader up for the big finale. Detailed below are some thoughts about it. 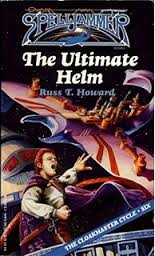 The Ultimate Helm by Russ T. Howard
The first time I read this book, I was disappointed. It felt much different in tone from the other five in the series. That, combined with the fact that I knew some change of author had occurred, led me to be dismissive of it.
I'm glad that I've read it a second time.
This time around, while I still think that it has a different tone from the other novels in the series, I also see how it develops a theme that provides a sense of closure for the series, and how some of its idiosyncratic qualities help to develop that theme. What is more, I think I see how it does a good job of taking material from the Spelljammer RPG line—most notably, the Legend of Spelljammer boxed set and the adventure modules Goblin's Return and Heart of the Enemy—and works them into a cohesive narrative.