Since it's almost two weeks after the Con, I figure I should offer a recap. Also, since I'm not a picture-taking type, I'm borrowing some photos taken by Donna Prior from Green Ronin Publishing, for whom I was running games. 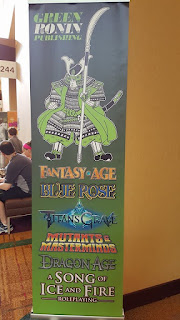 Here's the banner that marked the room. There were all manner of Green Ronin-supported games, including my Pathfinder Freeport sessions and the ones on the banner. 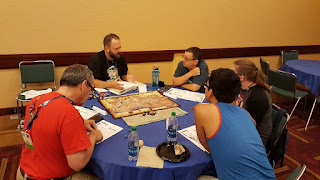 Here I am in action with my players. 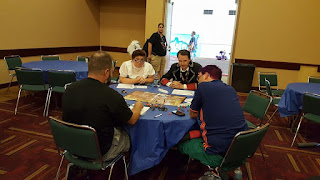 Here's one more from another round.

The scenario I ran was called "Tales from Freeport: Out of the Darkness." It went well. The story centers on an investigation of recent murders in the Merchants' and Temple Districts and Drac's End. Some of the highlights included:


This marked a return to Gen Con for me after missing the past three years--and that came after attending for sixteen years in a row. I'll give shoutouts to DJ Douglass for doing the legwork to make it happen, to Corey Russel for being a good roommate, and to Donna Prior for coordinating things for Green Ronin.

Outside of running my sessions and prowling the dealers' hall, I didn't do a whole lot. There was a night of Star Wars trivia at Champps that went well, but the thing I enjoyed the most was going to the Con and being surrounded by people who enjoy geeky things and who were engaged in those geeky things. I've been working on some space fantasy adventures for Pathfinder, and was feeling some inspiration while at the Con, so I spent a decent amount of time sitting around, writing, and watching people.