Curse of the Brine Witch Review 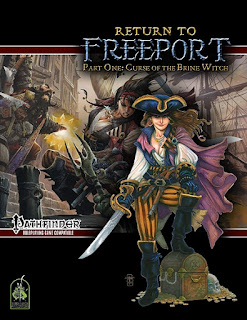 I should preface this review by saying that I can't be unbiased in writing it.

Back in 2000, when there were only two full adventures to be had for the newly released 3rd Edition of Dungeons & Dragons--the other one being Three Days to Kill from Atlas Games--I purchased Death in Freeport at Gen Con to kick off new campaigns once I went back home. That launched the first of four such endeavors, run with the D&D 3.0 and 3.5, and Pathfinder beta and release, rulesets. For that reason, Freeport has been the most consistent campaign setting in which I've ever run scenarios. Many of my players have played in multiple campaigns, allowing me to weave a real sense of history into the setting. This new adventure marks the beginning of a new story arc that takes Freeport into the time period represented by the massive Freeport: The City of Adventure hardcover, starting a whole new era.

With that said, I was satisfied with Curse of the Brine Witch. It introduces a mysterious situation, the investigation of which leads the heroes to various locations and personalities throughout the city. There are some seven encounters leading to a small dungeon crawl situation, followed by four more and then another such crawl. What is more, there's a table for introducing more conflicts for GMs who prefer slower advancement. The story is weird enough to be appropriate for Freeport, with hints toward an even greater plot.

All in all, this scenario is definitely worth the $4.95 price for GMs running urban Pathfinder campaigns, and it goes without saying that Freeport fans will get their money's worth.

Posted by Nate Christen at 6:33 PM