Here are the results of some speculation about three-dimensional combat.


Ship-to-Ship Combat in Three Dimensions
The rules in Chapter 4 of Ultimate Combat provide comprehensive guidelines for handling the movements of vehicles as well as combat between them. Even so, the peculiar nature of aethership combat—in which vessels are not constrained by the laws of gravity and thus can move in many relatively unusual ways—requires extra adjudication. Some suggestions for these circumstances are presented here.


Taking Evasive Action
For the most part, changing the relative positions of two or more aetherships can be handled with a maneuver known as evasive action. In this case, the respective pilots make opposed Pilot checks; the one with the higher result gains his or her preferred position. This check is considered to be part of other movements undertaken by the vessel, such as accelerating, decelerating, keeping it going and turning.


Sailing on an “Even Keel”
If they want, aetherships can travel in the same geometric plane as one another, keeping themselves squared up as if they were on a calm body of water together. This is called “sailing on a even keel.” In this case, combat can proceed as normal. The sides of the vessels provide crew members on deck with cover (+2 bonus to AC and +1 bonus to Reflex saves for those within 30 feet of the protecting side).


In the example below, vessels A and B are sailing on an even keel, so all combat between them and their crews is conducted normally. 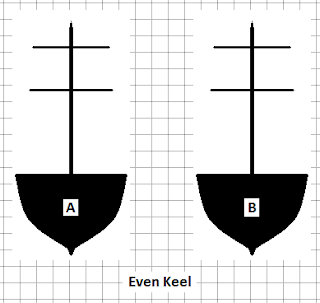 Gaining “the High Ground”
Another option is for one vessel to position itself in plane slight above that of the other, thereby exposing more of its hull but less of its main deck and sails. This is called “gaining the high ground.” in this case, bonuses for cover provided to crew members aboard the vessel with high ground are doubled, for +4 to AC and +2 to Reflex saves. On the other hand, attacks against the hull of a vessel that has the high ground receive a +2 circumstance bonus.


In the example below, the crew on the deck of vessel B gains double the normal bonuses due to cover, but attacks made by vessel A against vessel B's hull receive a +2 circumstance bonus. Keep in mind, too, that a ship could claim the high ground on one opponent, while simultaneously giving up the high ground to another. 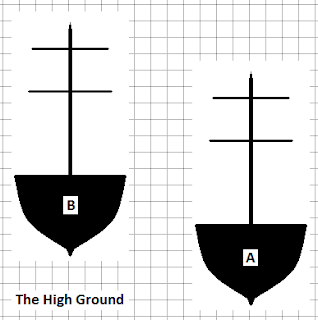 Above and Below
It's also possible for one aethership to swoop directly above or below another. In either case, it's unlikely that any of either ship's weapons can fire on the opponent, since they tend to have a fire arc of roughly forty-five degrees above or below the plane(s) in which the vessels are traveling. On the other hand, special attacks such as magic spells and portable missile weapons can still be used.

Posted by Nate Christen at 6:58 AM