Due to technical difficulties and real-life business, my work on this blog--and especially on the space fantasy material for it--has been delayed. Now I'm getting back to it, however. 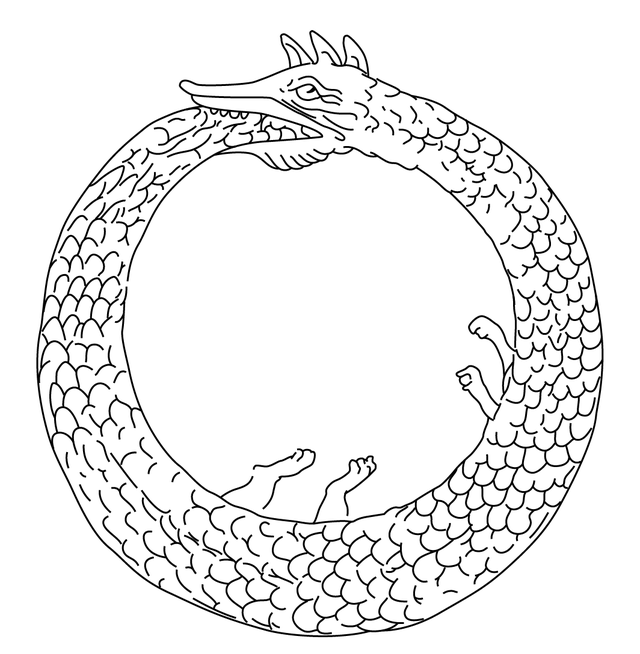 3. The Sign of the Ourobouros
While the elemental obelisk is the source of life on this worldlet, the center of activity is this tavern and inn known as the Sign of the Ourobouros. This tavern and inn is the place for gathering to share food and drink, and thus also a hub for speculating about voyages, hiring crew members and the like. A shingle hanging out front is adorned with the image of a serpent biting its own tail, which the proprietor says represents the beginning and ending of a successful voyage.
Most patrons assume that the proprietor is a human, and he is happy to let them make that assumption. In truth, however, Kane Prentiss is a serpent person, as are his followers; they simply take on human forms in order to make things more comfortable for said visitors. What is more, they can change their forms (becoming dwarves, halflings, elves, humanoids, etc.) as needed. 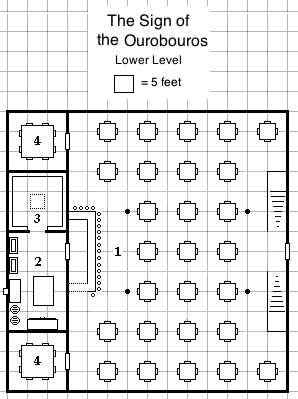 The Sign of the Ourobouros
Refer to the appropriate map for the following area descriptions.

1. Common Room
This broad, open area is filled with tables and chairs. Depending on the time of day, it is also filled with noisy patrons sharing food and drinks. There is a bar with numerous stools along one wall, and two stairways lead to the upper level just inside the front door. One door, behind the bar, provides access to the kitchen, while two others provide access to the private rooms (see below).

2. Kitchen
The kitchen is dominated by a broad hearth with a chimney, along with a preparation table, cabinets, water barrels and wash basins. There's always a strong smell of roasting meet and simmering stew, and the ceiling and walls are festooned with pots, pans and other cooking implements.

3. Pantry
A truly impressive amount of food is stockpiled here: fresh and salted meats, fruits and vegetables, beans, flour, oils, beer and wine, etc. Should someone ever lay siege to the asteroid colony, it could hold out for some time.

4. Private Rooms
Each of these rooms boasts a large table with eight chairs. Visitors who wish to conduct important (and discreet) business reserve one of them; usually there is no more demand than can be handled with the two of them.

5. Hallways
The front stairways lead up to the sleeping area; there are two parallel hallways, each line with rooms. 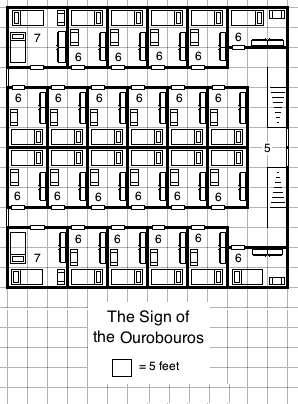 7. Larger Sleeping Rooms
Each of these rooms has an extra bed, in addition to the furnishings provided in the smaller rooms.


The Staff
Stats for the tavern and inn's staff are presented here.

Posted by Nate Christen at 5:23 AM