Here is another interlude, this one with suggestions for chase scenes that cover huge tracks of land. It is inspired by the novel Birds of Prey by Wilbur Smith.

Interlude 34: The Chase 2
A previous interlude, “The Chase,” provided tables for spicing up a pursuit in an urban setting. Such a scene makes for fast action, with characters ducking around obstacles, jumping from roof to roof and the like. It is also possible to evoke this kind of drama in the outdoors, using natural terrain as the background. While the action here doesn't move nearly so quickly--indeed, it can stretch over a period of hours or even days--it can still make for excitement. To do this, consider the following factors.

Refer to the appropriate chapter of the Player's Handbook for information about speed based upon terrain, and the same in the Dungeon Master's Guide (or the D20 SRD) for more details about getting lost. What is more, different landmasses can present different kinds of obstacles and hazards that the PC's and their quarry or pursuers must face. Take, for example, the desert island presented in the adventure "Dead Reckoning." It contains three types of terrain--hills, forest/jungle and swamp. These areas could present the following obstacles. 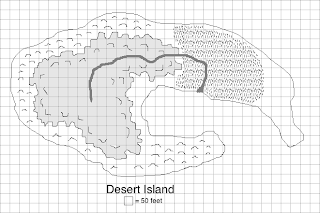 Hill-Climbing
In places where the hills are steep, members of the party must make Climb checks in order to advance. Failure adds to the time that it takes to bypass the obstacle, allowing pursures to close or quarry to escape. If the height of the obstacle is thirty feet (requiring two checks at DC 15), every member of the party must spend one round per check trying to surmount it. Failure adds another round to the group's total, which the GM can tally. There is also the possibility that someone falls, causing 1d6 damage per ten feet, or that one character can reach the top and lower a rope (and thus lower the check DC to 5).

In the event that a character is incapacitated by damage suffered in this way, it might become necessary for another person to haul the victim. Additionally, any treatment through the use of the Heal skill eats up more time, as does taking time to rest in order to regain hit points.

Slogging through Swamps
In addition to slowing down the overall pace of the party, swamps can also conceal quicksand. This is a large area of sand and possibly water that creates a deadly sinkhole. (Mud, snow and similar substances can work in a similar manner.) Upon falling into it, a character is initially one-half submerged and must make a DC 15 Swim check to reach solid ground. Simply floating on top of the quicksand requires a Swim check with a cumulative -2 penalty for each minute spent in it. One failed Swim check means the character becomes three-quarters submerged; a second failed check (at a -4 penalty) means the character is completely submerged and begins to drown. Movement to solid ground at this point entails a Swim check with a -8 penalty.

Only upon reaching solid ground—earth, stone a tree trunk that extends into the water, etc.—can the character attempt to climb out; this requires a DC 15 Climb check with a penalty similar to that of the Swim check above. Failure on the Climb check does not cause a character to become more submerged, but does prevent escape.

Other characters can attempt to pull out the drowning character with a DC 15 Strength check; failed checks do not cause the character to become further submerged.

Clearing a Path in the Forest/Jungle
This can be treated in the same manner as a complex action, as detailed in the encounter "The Shipwreck 2." A given patch of forest or jungle can be given a number of hit points or DC, such as 300. Characters involved in the trek can make attacks against AC 5 or Survival checks against the same DC, with those that succeed adding to a combined total. Reaching it allows the characters to proceed, with the GM again keeping track of time taken.This naturally gives an advantage to pursuers, who can follow the path taken by their quarry.

Tracking and Spotting
The rules for using the Survival skill and Track feat are well dilenated in the core rules; they can provide guidelines for following another person's trail--or for having someone tracking oneself. Should the pursuers come close enough to their quarry, they might actually be able to see them, depending on the terrain. For example, if an area of forest gives way to more open hills, the pursuers might be able to see and even shoot at the ones whom their following.

All in all, this kind of pursuit gives characters a chance to use their skills, and can make for a different kind of action from combat or the typical chase scene.
Posted by Nate Christen at 5:48 PM