Today's post is another interlude. This one helps to transition into a series of article and adventures set in the Mediterranean Sea and North Africa, following the events of the last adventure.


Interlude: The Shipwrecker
Legends tell of a massive bird known as the roc, one that has a wingspan eighty feet wide and is big enough to snatch up an elephant in its talons. Most naturalists believe that the creature is just a massive animal, and no more intelligent than other normal birds. That conclusions flies in the face of the old tales of Sindbad, however, take from The Thousand and One Nights. According to them, some rocs are
intelligent and even possess the ability to snatch up boulders and drop them on unsuspecting vessels.

Unfortunately for ships sailing the Mediterranean along the coast of North Africa, the tales are true. Indeed, there's a local by the name of Bashir the Bird Man who managed to acquire the egg of a roc, and then hatch the bird and raise it to be loyal to him. Now he uses the bird to attack unsuspecting vessels, hitting them with boulders from the air and sinking them, leaving their cargoes and other valuables for easy salvage.

At first glance, Bashir looks no different from any number of other desert-dwelling nomads. He wears the traditional flowing robe and turban, and always carries his trusty longbow and scimitar. He is ambitious and cunning, however, as shown by the fact that he was able to acquire a roc egg, hatch it, and raise the creature to do his bidding.


Using the Shipwrecker in Adventures
Bashir and his pet roc can be incorporated into adventures in any number of ways; a few of the possibilities are listed below.
*During a voyage in the Mediterranean, the roc could attack out of the blue, dropping boulders on an unsuspecting ship.
*The PC's could be hired to go in search of a ship that Bashir and his roc sunk, forcing them to scour the waters and eventually go in search of the man and his bird.
*If the PC's have made enemies in the area, one of them might hire Bashir to eliminate them once and for all.
*Given the roc's ability to snatch up horses, camels and even elephants in its talons, intrepid explorers might find all manner of goods amidst the nest it is aerie.
*The waters around its nest could contain numerous shipwrecks.
*For a twist, the PC's could be hired to steal an egg from just such a creature.


The Nest
The roc makes its home in an aerie along the coast of North Africa, a spire of rock that rises up on hundred feet out of the surrounding sea. This gives it an excellent vantage point and a highly defensible home. DC 15 Climb checks are required to scale this surface, along with Move Silently checks opposed by the roc's efforts to Listen if it happens to be present. 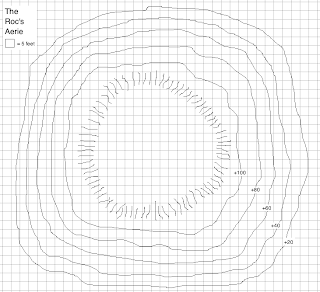 Detailed below are adjusted statistics for the roc, using the elite ability array instead of the normal scores. This makes the rocs more intelligent, giving them a ranged attack with thrown boulders.

To hit a targeted vessel with a boulder, the roc must make a ranged attack against an AC of 5. To do this it must be flying above the target, and the attack suffers a -2 penalty for every twenty feet the creature is above its target. If it hits, the attack deals 2d6 damage, plus 1d6 for every extra ten feet of elevation the roc has. For example, if the roc is fifty feet in the air, it makes an attack at -4, and deals 6d6 damage to the target.
Posted by Nate Christen at 5:17 AM