This week's update is another interlude, albeit one that can readily be adapted into a full-blown adventure.


Interlude: The Temple
The jungles of New Spain hide many secrets; chief among these are the remnants of the ancient Aztec and Mayan civilizations. While may of these have fallen into ruin, others are relatively intact. What is more, at least one is still occupied, albeit by a man who has long since lost touch with reality.

This interlude can be added to a campaign in a number of ways. A few of the possibilities are listed below.
*Characters trekking through the jungle might just stumble across it, thereby encountering the hazards that it entails.
*The madman could kidnap someone, leading concerned associates to recruit intrepid souls who are willing to go and stage a rescue.
*Alternately, someone who learns of the temple and suspects that it contains treasures could put together an expedition to retrieve them.
*Building on the previous option, said treasure hunter could eventually betray the PC's in hopes of leaving them for dead so as not to have to share the prize.
*For an even greater twist, the madman could actually be a nobleman or someone else of influence who has become delusional and “gone native.” (Refer to the article “Afflictions Revisited” in Issue 2 of the Buccaneers & Bokor e-zine for applicable game mechanics.) This person could be an heir to a fortune or something similar, making it possibly lucrative for someone to find him and help restore his mind.
*As in the fourth option, above, someone might hire the PC's to help find the madman, and then try to kill him and any possible witnesses.
In these ways, a GM could easily adapt this interlude into a full-fledged adventure with just a little work.

However it comes to pass, refer to the appropriate map for the following area descriptions. 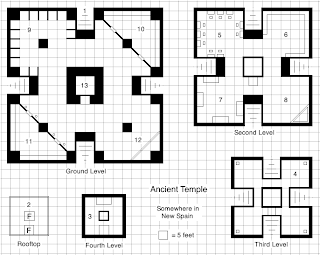 1. Exterior—Stairs
Four sets of steep, broad stairs lead up the outside of the temple, one on each side. Before the characters can deal with them, however, they must face two other dangers. First among these is a family of leopards that prowl around the area, ones attracted by the food that the madman leaves for them. He has also dug a spiked pit trap, twenty feet deep and ten feet on a side, at the base of each set of stairs.

Leopards—Refer to the Monster Manual for statistics.

2. Rooftop
At the apex of the pyramid is a flat platform used for important sacrifices. There is a table in the middle, beneath which an open pit leads down through the heart of the temple to an undeground bone pile beneath it. In front of the table, a stone slab conceals a ladderwell (DC 20 Search or Spot to notice, and DC 15 Strength to lift).

3. High Priest's Quarters
Back when this temple was actively used, the high priest occupied this room. It is sparsely furnished, with only a stone platform for a bed against one wall, since the priest's need were provided for by underlings who dwelled in the chambers below.

4. Puzzle Room
Four stone pedestals, each waist-high, occupy the outside corners of the four sections of this room. In the center of each of these is a trigger mechanism that can be pressed downward (DC 20 Search or Spot to notice). Although characters might not realize it at first, these correspond with the four urns from outside Area 3, below. On the wall behind each pedestal is a glyph—one depicts fire; the second, air; the third, earth; and the fourth, water. These must be match up with the urns containing the correct remains. One victim was drowned, the second was strangled, the third was beaten to death and the fourth was burned alive.

This area is also where the madman awaits intruders. He hides behind the central chute, then rushes to attack once the first character has entered the room.

The madman is a poor soul who has, not surprisingly, lost his mind. Now he dwells in bestial simplicity, hunting game and eating it raw. He does not take kindly to intruders in his territory.

5. Chamber of Altars
The walls of this area are adorned with bas relief sculptures depicting important Aztec deities. In front of each of these rests a small, raised stone platform on which offerings once were placed. Any character who leaves items for these gods and goddesses benefits from a bless spell for the duration of the adventure.

6. Storage Room
The walls of this room are lined with a broad stone shelf at waist height. A variety of baskets and clay jars are arranged on and underneath the shelf. While they once contained fresh foodstuffs and dried goods, their contents have long since spoiled. Now they are home to two swarms of centipedes that attack anyone who disturbs them.

7. Junior Priests' Quarters
Four more stone beds are situated against the walls of this section; it is otherwise empty.

8. Hearth
The outside corner of this room contains a recess intended to be used for building fires. A cleverly concealed channel in the wall allows smoke to escape the temple's interior.

9. Prisoners' Cells
At one time, those prisoners intended to be used as offerings were kept here. Outside of one skeleton, however, they are empty.

10. Crypt
In many ways, this room resembles the storage area, above. The chief difference is that it is filled with urns containing the remains of former priests. It is also home to a huge constrictor snake.

Constrictor snake—Refer to the Monster Manual for statistics.

11. Treasury
The doors leading into this room are locked by a complex mechanism with no visible apertures. It takes a DC 25 check to force the doors; otherwise, characters wanting to gain access must figure out the key to unlocking them (see Area 4 above). The four urns here each contain the skeletal remains of a body: one has a broken neck, one has numerous broken bones, one is clearly scorched by fire, and one has no visible injuries.

Even if interlopers can force open the doors, entering the room through either doorway triggers a scything blade trap. As a reward, though, characters can find here the priests' assembled valuables, including an amulet of natural armor +2, a collection of herbs that function as incense of meditation, and an atlatl +1.

12. Calendar Room
The outside corner of this area is filled with a massive calendar stone, a complicated affair that was once used for timekeeping but that is now covered in cobwebs.

13. Bone Pile
This was where the priests once dumped their refuse, and where the madman now does so. As such, it is filled with numerous old and brittle bones, along with some rotting remains and at least one fresh carcass. The area can only be reached by climbing fifty feet down from the rooftop, a task that requires multiple DC 20 Climb checks. This area is also home to three swarms' worth of rats.

Rat swarms—Refer to the Monster Manual for statistics.
Posted by Nate Christen at 7:27 AM